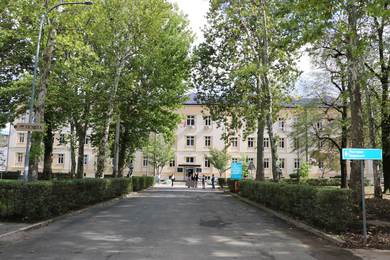 The Chinese language students also have the opportunity to participate in the Chinese Bridge Chinese Proficiency Competition, which is held every year, and, if they win, they represent their country in China. In 2019, the students of the Confucius Institute at the University of Banja Luka won the first and the third place in this competition. In 2019, the Institute organised a two-week summer camp in the People’s Republic of China for a group of interested students. In addition to language courses, the Confucius Institute also organises courses in Tai Chi Martial Arts as well as workshops on Chinese Calligraphy, Traditional Chinese Painting, Chinese Tea Ceremony, Paper Cutting Art, Weiqi, Chinese Cuisine, Chinese Traditional and Modern Dance etc. Furthermore, it organises lectures on different topics and book promotions, and so provides information on the culture, customs, tradition and social and economic trends in China. Alongside these courses, which are held at the Confucius Institute premises, elective Chinese language courses are regularly held at Montessori Kindergarten, Nest Day Centre for Children, Vuk S. Karadžić Primary School in Banja Luka, as well as at Banja Luka Grammar School (where a Confucius Classroom was opened). Furthermore, Traditional Chinese Painting and Chinese Calligraphy courses are held at the Secondary School of Technology in Banja Luka and an elective Chinese Language and Business Etiquette course at the Secondary School of Economics in Banja Luka and Secondary School of Economics in Doboj.

Tai Chi courses are not only held at the Confucius Institute premises. Namely, in cooperation with the City of Banja Luka representative and the President of the Executive Board of the Association of the Day Care Centre for Older Persons in Banja Luka, the course of this martial art, which is practiced worldwide because of the many benefits it has on human health, is also held at the Day Care Centre for Older Persons in Banja Luka. The Institute has also established cooperation with the Dr Miroslav Zotović Institute for Physical Medicine and Rehabilitation by providing Tai Chi training for its physiotherapists, so that they can continue to practice it with their patients. The Confucius Institute established cooperation with many institutions in the Republic of Srpska. Hence, it supported the Museum of the Republic of Srpska and its Archaeological Film Review, Mali princ Youth Organisation and Poliglota Institute in Brčko in their regular organising of educational workshops for the general public, the Academy of Arts at the University of Banja Luka in celebrating the World Music Day by presenting traditional Chinese music and instruments etc. The most notable cultural events covered by the media were: the celebration of the International Confucius Institute Day in 2018 with interactive workshops for children and adults in the Petar Kočić Park and a play performed by the actors of the Children’s Theatre of the Republic of Srpska in which they demonstrated the everyday life of people in China in a very interesting way as well as with the official ceremony at Banski dvor Cultural Centre performed by the Chinese language students, the ceremonial opening of Dao Terrace at the Faculty of Political Science in 2019, alongside with the promotion of the translation of Petar Kočić’s Mrguda into Esperanto and Chinese, as a result of the cooperation between the Institute, the International Association of Scientists – AIS, the City Esperanto Association La Mondo Banja Luka and Tianjin Esperanto Association, as well as this year’s Chinese New Year celebration.

The Confucius Institute is networking between the institutions of the Republic of Srpska and PR China, so that they can establish contact and cooperate better. Hence, in the organisation of the Confucius Institute, the representatives of the City of Banja Luka and the Tourism Organisation of Banja Luka participated at the 2018 China Tourism Industries Exposition in the city of Tianjin, where they presented the tourism programme of Banja Luka. It has also organised several official visits of the delegations from the academic and political circles of the Republic of Srpska and China. Furthermore, the Institute provides assistance in establishing the Sinology Study Programme at the University of Banja Luka. Over the several years of its existence, it has announced a number of scholarships for university students to study at universities in China. There are seven employees at the Confucius Institute. They are: one home director, one Chinese director, two associates and three Chinese language and culture professors.
Ljiljana Stević, Home Director, has led the Institute since its establishment. Ying Cai was the Chinese Director (2017–2019) and this function is currently performed by Shen Li (2019–).

The vision of the Confucius Institute is to become a relevant source of knowledge on China in the Republic of Srpska. In addition to promoting the Chinese language and culture, i.e., presenting Chinese language and culture to professionals and the general public, the Confucius Institute aims to advance the cooperation in the field of education between China and the Republic of Srpska and provide assistance in establishing cooperation between different institutions of the Republic of Srpska and the institutions of PR China. The Institute organises the Chinese language courses in primary and secondary schools as well as in higher education institutions, and educates and informs the business society of the Republic of Srpska on how to do business with China, helping them master everything necessary to make their business with China and other Asian countries as successful as possible. By regularly organising educational workshops that promote the cultural values of the Chinese people, the Institute actually strives to enable the citizens to take active part in the workshops and thus better understand and learn more about the different aspects of the Chinese culture.