On Wednesday, 26 March 2014, at the Rectorate of the University of Banja Luka, a working meeting was held with the participation of the University management and student organizations representatives. It was an opportunity for the Rector, Prof. Stanko Stanic, and his associates: Vice-Rector for international cooperation, Prof. Valerija Saula, Vice-Rector for teaching and student issues, Prof. Simo Jokanovic, and Financial Director, Mr Dusko Lazic, to find out firsthand what it was that students were and were not satisfied with, especially when it comes to teaching process and student standard, and other current student affairs as well.

Since the meeting was held immediately after the signing of the Contract for building the fourth residence hall for students' accommodation within the University campus, the representatives of student organizations welcomed the move, pointing out the significance of the construction of the building for student population. After that, each of them expressed their observations on current problems at their respective faculties.

Student representatives asked for support from the University management for realization of their plans for organizing professional practices and professional excursions as well as annual regional meetings of the faculties within the same field of expertise. After learning about the requests, the Rector promised support within the available financial capacities. 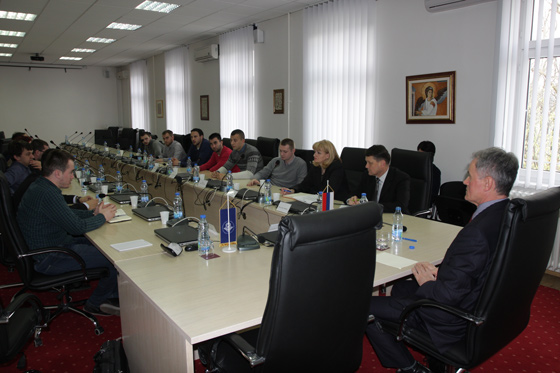 During the talks with the University management, students asked questions about the commencement of certain master studies at their faculties as well as the progress in dealing with spatial capacity problems at some of the faculties.
Aside from answering students' questions, the Rector and his associates immediately proposed solutions for problems identified and then future steps toward solving those problems were discussed.

The participants of the working meeting at the Rectorate finally agreed that it was important to maintain continuity when it comes to this type of meetings and that the following meetings will be initiated by students' representatives.